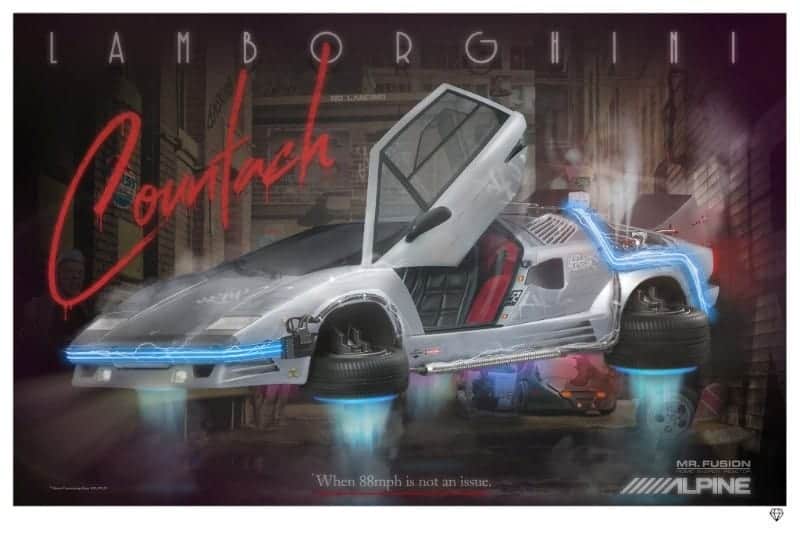 This is a play on the 1980’s famous Lamborghini Countach poster I had as a child on my bedroom wall in pride of place for as long as I can remember.

The piece is a mash up of Back to the Future II (which I saw in the cinema the day it was released in the UK) and my love of the car itself, as well as a retake on the classic 80’s Athena poster and car advertising.

In the Back to the Future II Film, in the year 2015, Hover Conversions are advertised on a billboard for $39,999,95 (See bottom left of image for the reference).: The setting is reminiscent of the alleyway scene from the film and features screen accurate graffiti and signage, like “Café 80s”, “Pepsi Perfect”, “Surf Vietnam poster” ad “Class of 16” as well as characters like Biff, Jennifer and the Police car.

The Lamborghinis Wheels have been replaced with a hover conversion and one of the original Lamborghini “Teledial” style wheels sits in the alley to the left, along with a hover-board and the litterbug robot from the film that they almost throw the sports almanac into before seeing the police car in the alley.

When released, the Lamborghini was fitted, famously with a bespoke Alpine Stereo system made especially for the Countach. (See bottom right of image)

Boba Fett from Star Wars features in one of my earlier pieces “Time Traveller” seated in a DeLorean, he is featured in this piece too, although you can only see his lower legs, behind and to the left of the vehicle in the alleyway, he is intending to steal the car in order to continue his “Time Travelling”, much like older Biff does in the film.

The slogan “When 88mph is not an issue” is a play on “Roads, where we’re going we don’t need roads” in that segment, the DeLorean struggled to get to 88mph quickly but the Lamborghini wouldn’t have that issue!

The quote “Nuclear Sucker” comes from the first film where Marty McFly first sees the DeLorean and says, “You mean to tell me this sucker is Nuclear?”

I first dabbled with the source imagery for this poster entirely for my own wall at home, without any intention of releasing it but after the feedback from fans and a good chat with my publisher, we decided to release it.

It is being released to coincide with the release of the film “Ready Player One”, I read the book in 2012 and it is one of my favourite books of all time.

Be the first to review “No Landing – Lamborghini Countach” Cancel reply

© Copyright Images in frames 2019. All rights reserved.
Cookies To make this site work properly, we sometimes place small data files called cookies on your device. Most big websites do this too.
Accept
Read more