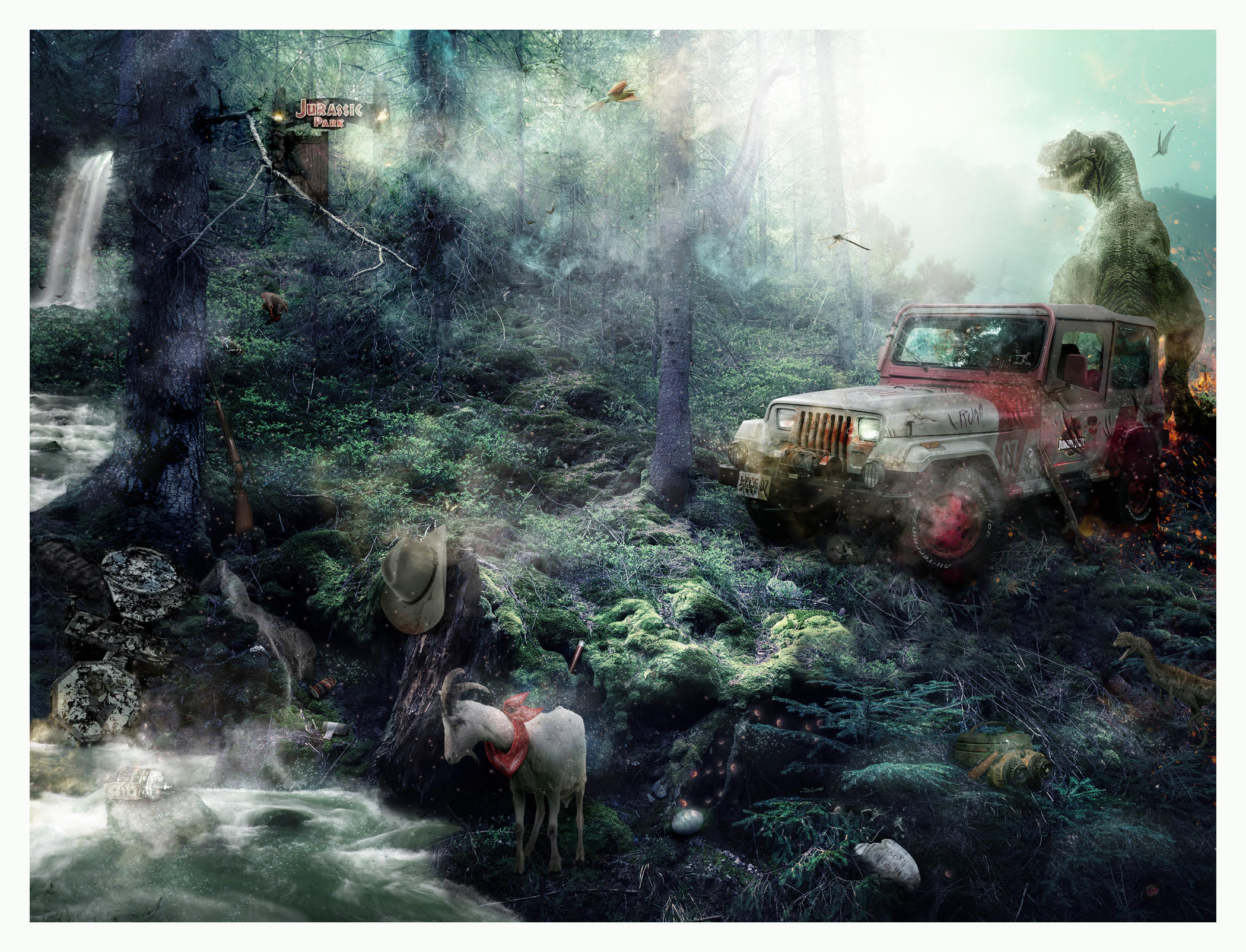 Life Will Find A Way (Jurassic Park)
by Mark Davies

Limited Edition print based on the film Jurassic Park.

I absolutely loved this film, amplified because of my fascination for dinosaurs as a child. T-Rex was always a favourite for me and the fact that he featured with such dramatic effect in the Spielberg picture albeit with pretty harsh results made it such a great film personally. The majestic nature of the creatures, brought back to life was incredible to see whilst the darkness that ran throughout the narrative coupled with sheer terror in parts resonated with me. I’m not sure if the T-Rex devouring the guy sat on the toilet left more of a lasting impression on me than the spitting Velociraptor that ate the tubby guy in the jeep, that was terrifying to watch.

I wanted to go in a different direction, creating an intriguing scenario that is full of detail that is open to interpretation that allows you to decide what has happened or in the midst of happening. I wanted to create a landscape that was beautiful, really beautiful, one of scale and wonder yet one that has a darkened quality where you’re afraid to look into the shadows in case you stumble upon something that is waiting, watching!

The contrast between mother nature and man is clear as day here, a beautiful forest with a majestic waterfall and meandering stream are impacted by a jeep that is trampling over all things bright and beautiful. Although I have left so much open to interpretation I have suggested however that the scene shown is set further on after the dramatic events within the park where the good plan had imploded into carnage. Look through the trees and you can’t not see the glow from a huge explosion – is that the park imploding or an eruption? The warmth from the fires that rage not only bring fear but comfort. Is nature taking back control?

The branded experience set up by the parks owners was left in tatters and most probably should have been left well alone, to be reclaimed by nature. However, an opportunist with an eye for a fortune looks to have exploited how exposed the venture was and has taken it on, whether it is being driven by good or bad hands is up to you. Is the past the past or is it the future? Who ultimately is the creator and who is actually the creature?

Greed breeds monsters but life will always find a way.